The shovels are finally hitting the pavement on Flagler in downtown Miami, nearly two years after city officials agreed to undertake a total reconstruction that’s meant to restore the tatty but storied byway to its rightful place as the city’s glittering Main Street.

Work has just begun on what’s expected to be a two-year, $13 million streetscape project, starting at the Miami-Dade County Courthouse and proceeding in 13 stages all the way to Biscayne Boulevard. 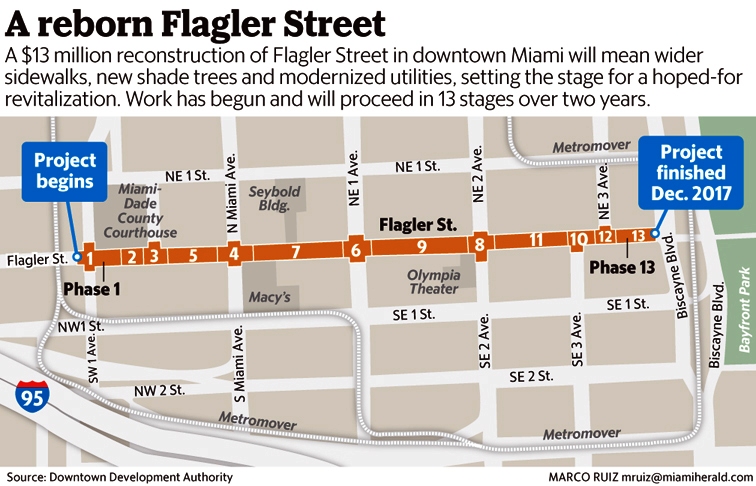 By the time the job is done, Flagler’s cracked, stained, slanted and narrow sidewalks, its scrawny-to-nonexistent greenery and its notoriously backup-prone gutters will be history, replaced by 150 shady oaks, new lighting and stormwater drains, and sidewalks twice as wide to accommodate the cafe tables and shoppers that the project’s backers expect the new street to attract.

On Thursday, the Miami City Commission approved the last bit of funding for the project, $920,000 for an upgraded drainage system and removal of old abandoned pipes that have been sitting beneath Flagler Street’s pavement for decades. 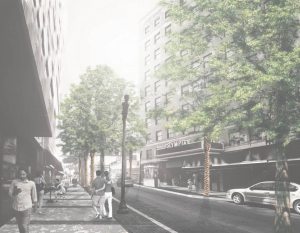 The street project’s timing seems especially fortuitous. It comes as New York entrepreneur and developer Moishe Mana has amassed what the website The Real Deal has tallied at nearly $200 million worth of properties on or abutting Flagler, with the idea of turning the street, which has long functioned as a down-market, discount-shop strip, into a restaurant, cultural and retail destination, all while preserving its historic low scale.

That combination of public improvements and private enterprise is what worked magic in places like Miami Beach’s Ocean Drive and Lincoln Road Mall, where the Flagler Street project’s backers note street and sidewalk improvements set the stage for a dramatic revitalization. That’s what they hope to replicate in downtown Miami.

“It’s really exciting,” said Brian Alonso, whose family owns the upscale La Epoca department store in the historic Walgreens building and the newer Lost Boy Dry Goods clothing shop in the also-historic DuPont building, both on Flagler. “Streetscape projects can transform an area. On Ocean, when you had Tony Goldman assembling property and the streetscape improvements at the same time, you had something transformative. You have something similar happening here. Mana can single-handedly change the area.”

Mana, who recently submitted plans for a massive, ambitious and controversial multi-use redevelopment in Wynwood, has been publicly coy about his precise plans for Flagler. But a video his company released in the fall shows refurbished buildings along Flagler, some occupied by rooftop lounges and restaurants. In the video, Mana calls Flagler Street a “Cinderella” that merely needs a new dress to reveal her beauty.

“Downtown is the future of Miami,” Mana says.