In 2008, Rhode Island’s Providence Arcade was in trouble.

Considered America’s first indoor mall, the nearly 200-year-old downtown building closed after struggling to fill its cramped commercial spaces. The arcade needed an overhaul, but few viable options existed: when the possibility of a gut job arose, preservationists raised holy hell. In the end, the shopping center and its snug quarters proved just the right fit for a growing housing trend: micro apartments.

Known as Westminster Arcade when it opened in 1828, the building marked the debut of English indoor shopping concept in the United States. Designed by architects Russell Warren and James Bucklin, the Greek Revival stone structure more resembles a courthouse than a shopping mall, what with its stately Ionic columns and sunlight-filled atrium with its glass gable roof. Shoppers browsed three floors of shops—or at least that was the idea; they never seemed willing to trudge up the stairs to the second and third floors.

The mall was nearly razed in 1944, but preservationists intervened, and it was spared. In 1976, the arcade was designated a National Historic Landmark, though businesses struggled. Even its 1980 renovation didn’t help much, and it ultimately closed in 2008. “It had become economically obsolete,” said J. Michael Abbott, a principal at Northeast Collaborative Architects. “When it was a full shopping center of all three floors, it just wasn’t working. Shops were opening and closing all the time.” 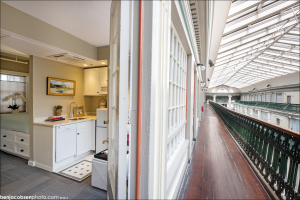 Oft smaller than a hotel room, micro apartments have grown in popularity in recent years as more people cram into urban areas and housing prices escalate. The concept first gained popularity in European and Asian cities before projects popped up in San Francisco, Chicago, and Boston during the Great Recession. And so, developer Evan Granoff, who bought the Westminster Arcade in 2005, sought to introduce shoebox living to Providence.

The construction practices of yore proved a challenge for the rehabilitation team, led by Northeast Collaborative Architects. “They just laid down some flat rocks and started building on top of those—that was the foundation,” Abbott said. “The building has settled over time. We call that ‘character.'” As a result, the walls had to be shored up, and custom doors and windows were created to fit the uneven contours. The well-worn wood floors and lacelike iron balustrades were left in place. 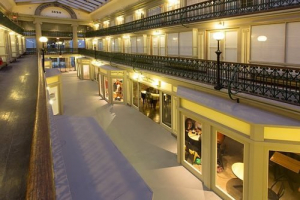 Work on the $7M project wrapped in October 2013. Granoff retained the retail spaces on the ground floor and rented them to retail busineses. These commercial spaces are enclosed by bay windows so sound doesn’t drift to the residences above. Inspired by ship construction, each of the 38 rental units—which measure from 225 to 300 square feet—includes a bedroom, kitchen, bathroom, and built-in storage. The homes on the second floor even have guest accommodations in the form of a twin Murphy bed. The Providence Arcade also contains eight larger apartments, a game room, storage spaces, and laundry machine.

Micro apartments are not for everyone—in fact, their clientele are “young kinds that just graduated.” They “are at the bottom-end of the totem pole and don’t have that dining room set that grandma gave them,” Abbott said. “They travel really light. They might have a bike and two suitcases.” The Providence Arcade’s dwellings have also attracted keepers of the shops downstairs as well as second homeowners seeking a place to stay when they’re in town. Rent starts at $550 a month, but future residents better get in line—there is already a waitlist.