David Beckham’s top Miami negotiator said Thursday that owners of the private land needed for a Miami soccer stadium “probably will blow this deal up,” sounding the alarm over a potential failure of negotiations he said must be completed within a few weeks. 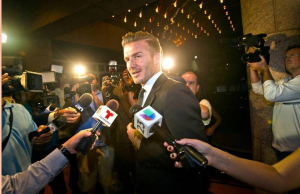 In an interview with the Miami Herald Editorial Board, Miami Beckham United’s Tim Leiweke said the partnership continues to make progress with the city of Miami to purchase city land across the street from Marlins Park and then transfer it to the Miami-Dade School Board, which would shield the new stadium from property taxes. But he said parallel negotiations to purchase six private parcels on the proposed stadium footprint have stalled as land owners haggle for unreasonable prices.

“They know what we’re doing, and unfortunately they’ve let that create an absolutely unrealistic conversation. They can absolutely blow this deal up, and they probably will blow this deal up,” Beckham’s top Miami negotiator, Tim Leiweke said. “We’re willing to overpay. We just don’t want to be the stupidest guys on the face of the earth.”

If the negotiations fail, Leiweke said Beckham’s group has a fallback plan at another undisclosed site. He also said Miami Beckham United hasn’t ruled out looking to a different city.

“We do have a backup,” Leiweke said. “We will not be held hostage.” 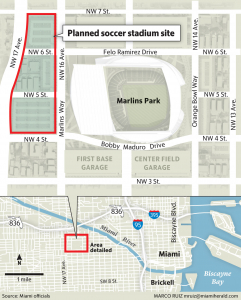 His blunt remarks could be an example of public brinkmanship to put pressure on the land-holders trying to get top dollar for their real estate, or it could signal real trouble in Beckham’s third try for a stadium site in his two-year quest to bring Major League Soccer to Miami. Miami plans a referendum on the expected stadium plan in March, to coincide with the presidential primary.

At least one property owner within the stadium footprint, Violeta Jimenez, said no one from Miami Beckham United has approached her to officially start negotiations. And for now, she said, it is better that way.

“Ideally, I would prefer that they don’t offer me anything and to stay in my house until I die. I have lived here for years,” said Jimenez, who lives in a duplex and whose next-door neighbor is her sister Adelfa. “We don’t want to get millions; we want to live peacefully.”

She said news of the stadium talks prompted a flood of third-party offers for her property. And yet, she said, “I’m not totally opposed to negotiating a fair deal.” 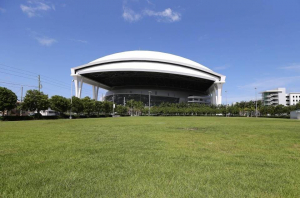 The Beckham camp confirmed that its real-estate team has not yet spoken to Jimenez as it tries to work out deals with larger properties nearby. It isn’t clear which property owners allegedly asked for an exorbitant amount of money.

Rene Diaz, owner of Candy House Daycare, told el Nuevo Herald on Thursday that he met with Beckham negotiators last month. He said he asked to be paid an undisclosed amount for his property, plus the value of his business, in addition to compensation for relocation of his daycare. Diaz said the negotiators told him his requests were “reasonable.”

An attorney for Beckham United, however, disputed his characterization of the negotiations. Michelle Gonzalez said in a statement that she met with Diaz last month and asked him what he thought he should receive for his property, which according to the property appraiser has a market value of $368,000.

“The number he came back to us with was 30 times the fair market value of what the land has been appraised at,” Gonzalez said. “We feel that is completely unreasonable.”

Attempts to reach Diaz again Thursday evening for a response were unsuccessful.

Beckham was thwarted last year in bids to build on government land at PortMiami and downtown Miami. Leiweke, who recently came aboard as a partner and negotiator, was critical of the efforts that led to such high-profile failures.

“We’ve shot ourselves in the foot quite a bit in the last two years,” said Leiweke, president of the company behind Toronto’s MLS team and the former CEO of AEG, which owns an MLS franchise in Los Angeles.

Leiweke was instrumental in bringing Beckham to play for the L.A. Galaxy in 2007, a deal that included an option for Beckham to buy an MLS team himself at a deep discount.

MLS Commissioner Don Garber has already extended Beckham’s option as his Miami stadium chase dragged on, and Leiweke said the upcoming MLS owners meeting on Dec. 5 is the latest deadline. He said that without an agreement with the school board, city and land owners, he’s not confident MLS will extend the option again.

“I’ll let the commissioner decide,” Garber said. “But I don’t like those odds and it makes me very nervous about MLS in Miami.”

Beckham’s investment group is offering to build the $200 million stadium and pay Miami for the city-owned land needed for the stadium. It had been pursuing county ownership of the facility to shield the new stadium from property taxes, but last month abruptly switched the plan to Miami-Dade’s school system being the landlord.

Schools chief Alberto Carvalho touted the potential deal as a win for the schools, which get no tax dollars from government-owned stadiums. By owning Beckham’s stadium, it could have a 30,000-seat venue for large football games, graduations and events. But Leiweke revealed Thursday that one of Carvalho’s top requests wouldn’t be granted: building a magnet school dedicated to sports management inside the stadium itself.

“Quite frankly, we don’t have the space or the money for that,” Leiweke said. Instead, the stadium would accommodate visiting students to learn about sports. In a statement, Carvalho said both sides want to create “meaningful educational space” within the stadium.

Miami-Dade Mayor Carlos Gimenez saw the switch to school ownership as a political move by Miami Mayor Tomás Regalado, whose daughter, Raquel, sits on the school board and is challenging Gimenez in the 2016 mayoral race. Leiweke said Thursday it was Tomás Regalado who suggested the Beckham group meet Carvalho about potential ownership, which the city mayor called “an interesting concept.”

Leiweke said Beckham’s group will agree to continue paying the same property taxes that the private landowners currently pay local governments, but not the far larger bill for a stadium expected to cost about $200 million to build.

“If you put a true property tax on this property, this thing could never be built,” Leiweke said of the stadium.