Public art, pedestrian-friendly developments, and a booming commercial sector are all part of the future of Coral Gables, commercial real estate experts discussed at a panel last Wednesday. 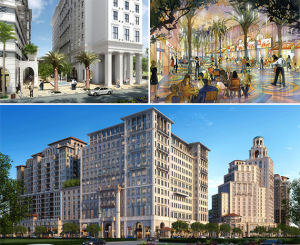 Clockwise from left: Renderings of Paseo de la Riviera, a curbless Giralda Avenue and the Mediterranean Village at Ponce Circle

Paseo de la Riviera is among the new projects. The planned, mixed-use development will replace an existing Holiday Inn with a open-air “paseo,” hotel and residential tower, said developer Brent Reynolds, president and managing partner of NP International. “We felt the U.S. 1 corridor was the right location,” said Reynolds, one of the panelists at a CREW-Miami luncheon at the Four Seasons Hotel Miami on Brickell.

The 2.66-acre project, located at 1350 South Dixie Highway, will activate that corner of U.S. 1 and Caballero with transit-oriented development, which includes green space the 0.5-acre Paseo will provide. It will be across the street from the planned Underline linear park, which runs underneath the Metrorail, as well as the University of Miami.

The paseo, or walkway, will span 352 feet in length and 72 feet in width. A 10-story, 252-key hotel and an eight-story, 224-unit residential building with 838 parking spaces will replace the 155-room Holiday Inn. “There really is no amenity space like this in the south Gables,” Reynolds said during the event.

The developer plans to complete the approval process with the city in October and begin construction next year. Coral Gables architect Jorge L. Hernandez and international firm Gensler are designing the project.“There really is no amenity space like this in the south Gables,” Reynolds said during the event.

It will also feature an underground loading zone, keeping most of the street parking. To maintain the pedestrian-friendly design, the developers have decided to move the hotel entrance to inside the complex. The developer will spend an additional $7.8 million for public spaces including art, Avila said during the panel.

Downtown Coral Gables by the numbers

The city is also investing in pedestrian-friendly and green spaces. Funding for the $20 million streetscape improvements was approved back in August 2014: 50 percent will come from the city of Coral Gables and the other half from the independent BID property owners. The Gables BID is fully funded by its members, Foglia said. Marina Foglia, a panelist and executive director of the Coral Gables Business Improvement District, has led the $20 million Miracle Mile and Giralda Avenue streetscape project. Foglia also advocates for the overlay district, which will “change the coding to activate downtown Coral Gables,” she said.

Cooper, Robertson & Partners designed plans for the project, which calls for more green spaces and improved pedestrian areas, such as wider sidewalks, outdoor dining areas and mid-block parks and plazas. Parking on the street will be entirely parallel, doing away with the 45-degree angled spots for more sidewalk space. Giralda Avenue will become curbless, with the option of closing the road off to vehicles for special events. Next, Coral Gables will hold a design workshop on Aug. 27. The streetscape project will break ground in January, Foglia said.

Panelist Jane Tompkins, development services director for the city of Coral Gables, named other new projects that are under construction, including the Aloft Hotel at 2524 LeJeune Road; 2020 Salzedo, a residential project; and the University of Miami Health Center. More have been approved, including 4311 Ponce de Leon and 1200 Ponce de Leon. “We have a lot going on,” Tompkins said. “We have several projects under way.”