Courtyard Marriott Could Soon be Condos

The Courtyard Miami Downtown, a 233-room Marriott hotel that sits on a prime 1.07-acre site in the heart of the urban core, is up for grabs.

CBRE is marketing the asset, which could be redeveloped into over 1,000 condo units under the Miami 21 zoning code. 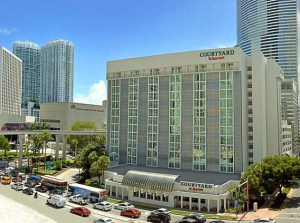 “This is an extraordinary location in the heart of Miami’s business district, directly between the new landmark All Aboard Florida Miami terminal, Miami Worldcenter and Brickell City Centre projects,” said CBRE vice chairman Robert Given, who is marketing the hotel on behalf of AVR Realty. The Courtyard Miami Downtown is located at 200 SE 2nd Avenue.

Miami’s hotel market  is one of the strongest in the nation, with a June year-to-date average daily rate (ADR) of $202.87, ahead of cities such as San Francisco and Boston, CBRE’s research reports. Meanwhile, luxury condominiums in Downtown Miami are commanding pricing in excess of $1,000 per square foot.

A high concentration of class A office space in Brickell and Downtown surround the 13-story Courtyard by Marriott. Premier large-scale mixed-use developments, including Swire’s Brickell City Centre and the Met Miami projects are located within a short walk.

The site is also close to some of South Florida’s most recognizable attractions, including Bayside, American Airlines Arena, Miami Tower, the Port of Miami and Mary Brickell Village. Hotel visitors or condo residents would have quick access to Brickell Avenue, Interstate 95 and Interstate 395.

Given and Charre, along with Paul Weimer and Natalie Castillo of CBRE Hotels, and Gerard Yetming of CBRE’s Institutional Properties group, are marketing the asset.