By ADMIN / 20 Apr 2015 / No Comments
Chapman Ducote on a Delta Powerboats yacht.

A group of developers is preparing a plan for live/work loft units and a boat storage facility with a marina along the Miami River. 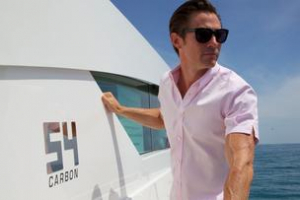 Chapman Ducote, the managing member of the development group, said he’s planning two buildings at 600 N.W. Seventh Ave. One would be a dry stack for boat storage attached to a high-end marina. The other building would have live/work lofts with high ceilings and a modern look, in addition to some retail, he said. While the size of the buildings aren’t finalized, Ducote said the mixed-use building would be eight to 12 stories tall.

“There is a beautiful neighborhood on the other side of the canal from us and we want to be in tune with what works in the neighborhood,” Ducote said. “We will remove a boat yard that isn’t very pretty and replace it with a nice modern building.”

Miami Boat Storage, an Aventura-based partnership between AL US Investments, Quillpoint Capital Investments and Ducote, recently bought the 47,152-square-foot lot for $3.65 million to save it from foreclosure. Ducote is also the president and CEO of Miami Beach-based credit card processing firm Merchant Services LTD, a professional racer on the American Le Mans series, and a major investor Delta Powerboats, a Swedish company that builds yachts fully out of carbon fiber.

“The live/work concept, particularly in other cities, is starting to work and get some legs behind it,” Ducote said. “You have residential and office in the same dwelling with a wall separating the two.”