Get Ready, Shoppers: Miami’s New Mall Will Be Nation’s Biggest

At a time when mall shopping is dwindling, there’s a plan afoot to build what would become the country’s largest shopping center, complete with a ski slope, sea lions and Legoland. 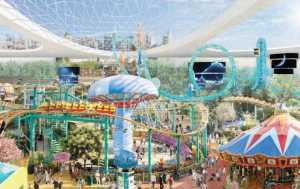 Though centered around a mall, the proposed American Dream Miami would also have a Ferris wheel, roller coaster, and 500-foot-tall observation tower. Most of it would be enclosed by a dome shown here in the artist’s rendering of the theme park. Proposed for Northwest Miami-Dade County, the project comes from the developer behind Minnesota’s Mall of America

The $4 billion plan, as detailed by the Miami Herald, would employ 25,000 people in its 200-acre complex, which is slated to be located in Miami’s suburbs. That would make it Miami-Dade’s largest private-sector payroll, the publication noted.

The bold plan comes at a tricky time for malls, as shoppers are snubbing them in favor of Internet shopping, or simply heading to Main Street. Construction on new enclosed malls has ground to a standstill, with only one, Florida’s University Park, opening in the past decade. Given the shift in consumer trends, it may seem risky to plan such a huge undertaking, but the developer is betting that the sheer size and variety of attractions will get people hooked.

The complex is slated to offer stores and a range of attractions, such as a skating rink, a waterpark and a theme park including a roller coaster and Ferris wheel. The developer, Triple Five, is also the company behind Mall of America, which has about 4.2 million square feet and offers 520 stores and 50 restaurants. While the developer didn’t disclose the square footage of the planned Miami mall, it told the publication that the new mall will be larger than Mall of America.

“It is our intent that this project — American Dream Miami — will exceed our other world famous projects in all respects,” Triple Five said in a statement. Triple Five didn’t immediately return a request for comment. 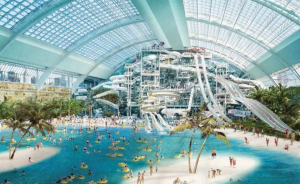 Plans for a water park at the American Dream Miami entertainment complex include 20 different “slides and water treatments,” and the world’s tallest indoor bungee tower. Proposed for Northwest Miami-Dade, the complex would be the largest mall in the United States. Proposal by developer Triple Five

The outsized mall comes at time when enclosed malls are shutting down, becoming ghostly relics of a bygone retail era. There’s even a site called DeadMalls.com that records the locations of razed or shuttered malls, such as downtown Rochester, New York’s Midtown Mall, which opened in 1963 as the first urban indoor mall in America. After struggling to keep tenants, the mall was closed in 2008 and demolished in 2010.

The decline of the mall has been precipitous enough that an executive with one of the largest privately held real-estate companies last year projected that the traditional mall could be dead in a decade.

But American Dream Miami isn’t aiming to be an ordinary enclosed mall. The glass-covered structure would also include luxury hotels, miniature golf, and a ski slope with 800 feet of artificial snow.

While the mall will bring more jobs to Florida, many of those will be in the types of low-paying occupations that are common in the state, such as store clerks and waitstaff. Median household income in Florida stands at about $47,000, below the U.S. median of $53,000, according to the Census.

Still, Mall of America may be breaking the mold when it comes to the twilight of the American mall. Triple Five is currently working on a $325 million expansion of Mall of America, adding a food hall and underground valet parking. The investment is aimed at pulling in 60 million annual visitors, up from 42 million currently.