Is “green” living important to you?

If you’re a boomer or GenX’er, the answer is likely “yes,” and interest in environmental sustainability is increasing. That’s why some forward-thinking retirement communities are offering residents everything from greener buildings to energy-efficient lighting to community gardens. And some towns are putting a focus on walkability.

According to AARP surveys, such measures are important to a large segment of older Americans. Its 2014 House and Community Preferences of the 45+ Population survey, for example, found that 61% of respondents valued their community being “easy to walk,” with those over 65 most appreciating walkability. Roughly 30% wanted their community to be near transit with an equal portion wanting to be close to a park.

Traditional retirement communities, though, have typically been built on the outskirts of town, leaving residents dependent on cars. And their manicured lawns and golf courses usually use plenty of chemical fertilizers and herbicides, not to mention water — a scarce resource in much of the nation.

A recent New York Times story found that the supply for green retirement communities has not kept up with the demand. But that may be shifting.

If environmental concerns or saving money through energy-efficient housing matters to you, here are a few examples of what’s out there:

One standout is Pennswood Village in Newtown, Pa., a Quaker continuing care retirement community founded in 1980.

“Sustainability is one of our six founding Quaker principles,” says marketing director Jennifer Doone. “It was important to our founders, and it continues to be important to our residents and staff.” 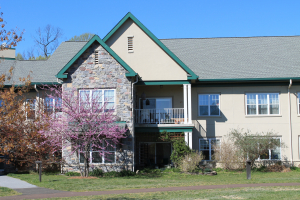 The community is open to all, not just Quakers. Among the steps Pennswood has taken: It constructed a personal care (assisted living) building with LEED gold certification, the second highest level given by the U.S. Green Building Council; it installed a geothermal heating and cooling system for some common buildings; it supported a resident-initiated recycling program; it planted a community garden and, through a partnership with the nearby town, it created an award-winning, multi-million-dollar storm management system under its natural meadow that benefits Pennswood and the surrounding community.

Doone says representatives from other senior living communities visit Pennswood to learn about its LEED certification and landscape and architecture students come to study the storm management system.

New residents Lynne and Todd Waymon, in their 70s, were drawn to Pennswood in part because of its environmental ethic. They immediately joined the residents’ Environmental Concerns Committee, which developed a year’s worth of activities to encourage sustainable practices, such as reducing the use of plastic bags. Working in partnership with the dining services staff, the committee found that residents and staff used 2,250 plastic bags in June, just for carrying leftovers from the café. After their campaign began, the number dropped to 1,750 in July.

Lynne Waymon, who had not been an environmental activist before retirement, says she views Pennswood as a microcosm and says she hopes to put the experience she gains there to use at the town or state level.

“People get to a certain age and they think, ‘I’m done, I don’t have any influence or say,’ and that’s sad,” she says. “I want people to band together and feel powerful — and know that we can make a difference.”

Pennswood residences range from studio apartments to two-bedroom homes. Two possible contracts are available: fee-for-service, in which long-term-care costs are paid later as needed, either at Pennswood or elsewhere or a lifecare contract which includes long-term care, including a nursing home, at Pennswood. There is a one-time entrance fee and monthly service fees. The cost ranges from a $90,000 to $400,000 entrance fee, depending on the contract, and monthly fees of $2,500 to $8,000 for a couple.

“The whole reason that we started this community was to demonstrate how to live more sustainable lifestyles and to put some very good working models on the ground so that people could come visit and get inspired and take home good ideas to their own communities,” says Liz Walker, EcoVillage’s executive director.

EcoVillage in Ithaca, N.Y. is a large co-housing, independent living community with an unusually strong commitment to living green

Now in its 24th year, EcoVillage is comprised of three neighborhoods. When the newest section is fully occupied later this year, 230 people will live there, about one-quarter of them over 60. Eighty percent of the new housing is wheelchair-accessible, something the community hadn’t considered building when its founders were younger. Currently, homes are available for rent starting at $450 a month and for sale starting at $97,000.

“We’re aiming at affordability, accessibility and sustainability,” says Walker. “These goals can be in conflict with each other, so we’re trying for a happy medium.”

The newer homes are among “the most energy efficient in the United States,” she says. Using a “passive house” system, developed in Germany, they are 80 to 90% more energy efficient than what the standard building code requires, Walker says. Two of the new homes produce more energy than they use, by employing solar for heating, electricity and hot water. “It’s extremely hard to achieve,” says Walker. “I’m very proud of our group.” (In September, EcoVillage is offering a workshop on how to achieve net zero energy buildings.)

EcoVillage has also preserved 80% of its 175 acres as green space. The property includes an organic farm, a neighborhood root cellar, and community gardens, ponds and woodlands. 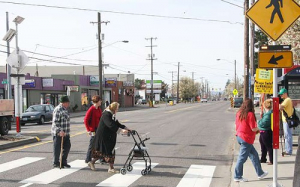 Portland, Oregon, is bike and pedestrian friendly with a network of light rail, buses and streetcars

What about the eight out of 10 people who say they’re not moving anywhere? The growing movement to make cities “age friendly” shares many of the “livability” goals of environmentalists — such as increased walkability, public transit options and community gardens. At least 28 U.S. municipalities, as well as AARP, have joined the World Health Organization’s Global Network of Age-Friendly Cities and Communities.

One pioneer is Portland, Ore. The city is bike and pedestrian friendly with a network of light rail, buses and streetcars. Its Green Building and Development Program works with residents and businesses to encourage sustainability.

Portland’s original development was during the streetcar era, with each terminus on the line having a village center, explains Barbara Bernstein, executive director of the nonprofit Elders in Action. “So our neighborhoods are built around these,” she says. “Within walking distance is a library, several coffee shops and restaurants.”

Walker also points to some 30 farmers markets and a vibrant local agriculture scene. Entrepreneurs are creating new businesses, she adds, such as Soup Cycle, which pedals homemade meals to customers. Bernstein, 55, uses the service after a long day’s work. Businesses like these give older people easy access to ready-made fresh food, she says.

All these efforts at sustainability promote a high quality of life.

“With so much demoralizing going on in the world,” she says, “the local focus that Portland offers is really life affirming.”