Investors Bank On A Renaissance In Working-Class Allapattah

But in the roughly five-square-mile Allapattah neighborhood of Miami, one of the city’s oldest, home values are rising at a faster clip than the multimillion dollar mansions of Miami Beach. 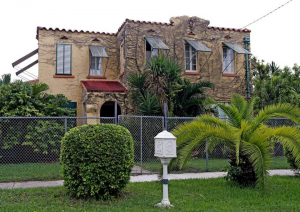 A house on Northwest 25th Ave in the Allapattah neighborhood of central Miami. Developers and investors are buying properties there because it’s close to downtown and on the edge of Wynwood. CHARLES TRAINOR JR MIAMI HERALD STAFF

In the last year, home values in this working-class community are up nearly 24 percent, according to data collected by online real estate company Zillow. The Miami-Dade County average is 8.6 percent.

The reason for the surprising surge? 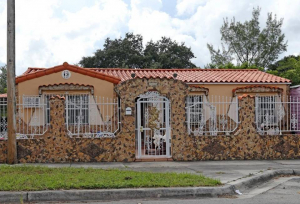 A house on Northwest 25th Ave in the Allapattah neighborhood of central Miami. Developers and investors are buying properties there because it’s close to downtown and on the edge of Wynwood. CHARLES TRAINOR JR MIAMI HERALD STAFF

Rock-bottom prices and Allapattah’s proximity to hot-spots like the Design District, Wynwood, the Miami River and the Health District around Jackson Memorial Hospital have investors salivating over the area’s low-end housing stock — and buying up everything they can.

“There’s so much speculation among investors because the prices are so low,” said Alex Ruiz, a real estate agent at the Keyes Company who grew up in the area in the 1960s and ’70s.

“It was a very booming area when my family was there,” Ruiz said. “There were movie theaters and stores and restaurants all along 36th Street and a Coca Cola Bottling company plant.”

Allapattah, sometimes called Little Santo Domingo because of its large Dominican community, has transformed since its heyday decades ago. Today, most people who live here are low-income renters. Many rely on Section 8 vouchers. 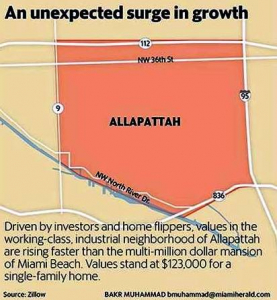 A growing number of homes, all on small lots close together, are being converted for multi-family use. There are few stores beyond pawn shops, car mechanics, corner stores and bare-bones restaurants. Businesses are mainly industrial, with boat yards and drydocks lining the Miami River. Crime is a problem. A shooting left a man dead over a recent weekend.

But Allapattah may again be on the cusp of change.

Investors are snapping up properties with cash, renting them out and waiting for a boom they expect to spread west from the shops and galleries of Midtown and north from the high-rises of the Miami River. It’s hard to find better deals in Miami.

“We can buy a house for $60,000, tear it down for $10,000 and build a duplex for $200,000,” said Jorge Artiles, a realtor and home flipper who works in the neighborhood with bank-owned properties. “Then we can rent it out to two families for $1,700 per month. We are putting the money to work and then we can sell for a profit because the market keeps going up.” 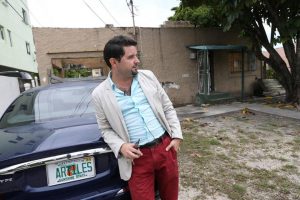 Artiles said investors are banking on the expectation that in the next 10 to 15 years, Allapattah will be transformed. The area is close to expressways, the airport, downtown and Miami Beach. Along the north bank of the Miami River, young professionals are renting out apartments and condos because of easy access to jobs downtown, Artiles said.

“We’re trying to brand this area as the Miami River District,” Artiles said. “That’s what it is on the south side of the river. But if I say Allapattah, I cannot charge $2,400 for a unit.”

One sign of the area’s potential for developers: A major mixed-use project called River Landing is planned for the river’s north bank near the Health District, although it may be slowed by creditors.

Realtors are seeing interest along Allapattah’s eastern edge, too.

“It’s right next to the Design District and it’s very affordable,” said Paola Chapman, a real estate agent who just took her first Allapattah listing because of rising values.

For homeowners in the area, change cuts both ways. Locals welcome rising real estate values, said Albena Sumner, president of the Allapatah Homeowners’ Association and a resident since 1965. But transient renters bring a different feel to the community.

“Where you used to have a family owning a home, now you’re renting out a duplex,” Sumner said. “It’s gentrification. It’s what happens in poor communities. It happened in Wynwood. Now it’s happening here.”

← How Project Sunroof Is Mapping The Planet’s ‘Solar Energy Potential’ One Rooftop At A Time
“Clean Tech” A Priority Issue As Chinese President Lands In The U.S. →