For many years, a handful of initiatives to redevelop a broad swath of city-owned, semi-derelict Watson Island have lurched along the MacArthur Causeway like zombies, never quite dead or alive. 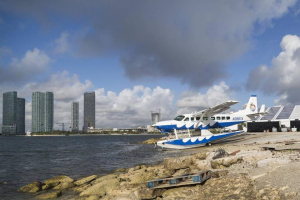 A plane begins departure toward Bimini, Bahamas from the Miami Seaplane Base in Watson Island.

Now it seems 2016 could be the year when the undead — the old Chalk’s seaplane terminal, a long-abandoned heliport, and a megayacht marina and resort plan that’s been stalled for 14 years — spring back to at least some sort of half-life on the island just off downtown Miami, long known as a burial place for sketchy development schemes looking to exploit public land. But the long-term prognosis for each remains unsettled.

At the seaplane base, a new operator promises to undertake a temporary revamp of the quasi-dilapidated facility, establish an expanded flight schedule, and formally submit to the city plans for a new terminal building that include a restaurant and public observation areas so visitors can bask in the romance of travel by seaplane.

Next door, after years of controversial delays and extensions by the city, Flagstone Development is nearing completion of the piers for its megayacht marina, which its representatives insist will soon be operational. The firm has also begun to clear its upland leasehold for Island Gardens, the $600 million hotel and retail complex Flagstone is supposed to build under an agreement with the city — even though financing has not yet been identified, at least publicly, a year after Flagstone agents said they hoped to have it nailed down. 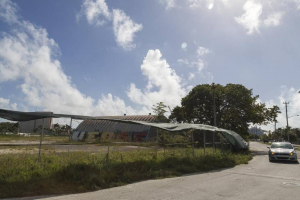 An abandoned heliport sits near the Miami Seaplane Base

Meanwhile, a contractor who won a bid a decade ago to reopen the heliport across from the seaplane base and Island Gardens is up to date with rent payments after falling behind and also paid FPL, with help from a city agency, to bury power lines at the site that posed a flight hazard, said Miami Mayor Tomas Regalado, who pledges the facility will be open and running this year. Right now, though, the heliport consists of a rusted metal shed, broken concrete and weeds.

Then there’s the perennially troubled Jungle Island animal and banquet-hall attraction, formerly Parrot Jungle, which has attracted a fraction of its projected attendance since opening in 2003. Its operators are now consistently making rent payments to the city, paying off a federal loan that was once in arrears, and raising money to make over the attraction with a new emphasis on water features and restaurants — and maybe a hotel as well.

Miami City Manager Daniel Alfonso met in early December with Jungle Island representatives, who told him they’re bringing in a new investor, ESJ Capital Partners, based in Aventura. Alfonso said in an interview that the discussion didn’t delve deeply into details, but there was talk about ESJ, which invests in a number of charter schools, introducing a new education component.

He also said Jungle Island representatives alluded to the possibility of new development at the site, something that has come up from time to time, often in reference to building a hotel. But Alfonso said any consideration of a hotel would be complicated because of requirements for a voter referendum in approving major improvements at the waterfront site.

To Regalado, who stresses that all of the projects predate his assumption of the mayor’s job, getting them moving is a central accomplishment of his administration. He notes the other major facility on the island, the Miami Children’s Museum, is popular and on solid footing — even if it took city approval of two massive and controversial electronic advertising billboards on the building to help shore up its finances.

“I think it’s part of my legacy. It will not be my doing. It’s been a long time coming,” he said. “But I think I’ll be very proud of leaving office with things going on in Watson Island.”

Regalado and city officials have defended extending the life of stalled or troubled projects on Watson Island like Island Gardens even after they’ve missed contractual deadlines or rent payments, saying previous administrations locked them into binding agreements which they’re obligated to make work as well as possible. But to skeptics and critics, all that progress is anything but positive. They say the Watson Island projects cement a legacy of seat-of-the-pants planning and questionable deals, with most of the publicly owned island effectively privatized.

“It’s really sad to me to see the evisceration or the loss of any kind of public space there,” said Greg Bush, a co-founder of the Urban Environment League and history professor at the University of Miami. “You could have a real park out there, or at least buildings with a public use. Instead what I see is the long-term lack of good planning and public benefit going over several generations, kind of endlessly.”

Those leery of the Watson Island projects include Miami Beach officials concerned about traffic impacts on the frequently clogged MacArthur Causeway, which bisects the island, as well as the new city commissioner for the district, Ken Russell. During his campaign, which was run by a lobbyist for a group critical of Flagstone, he criticized extensions for Island Gardens, which his predecessor, Marc Sarnoff, supported.

Russell said he’s now studying the deals and the role in them of the city’s Miami Sports and Exhibition Authority, or MSEA, which Regalado chairs and which serves as landlord for Island Gardens, the Children’s Museum and the seaplane and heliport facilities. Under city ordinances, the agency can lease out waterfront properties without a referendum, a requirement for city-owned waterfront land not controlled by MSEA, which includes the Jungle Island site.

Russell said that so far he’s found MSEA’s role“bewildering,” although he’s not yet prepared to take a position on the Watson Island projects.

“It seems there’s a lot on Watson Island coming to the forefront, and these are all things I want to look into,” said Russell, whose chief of staff once ran MSEA for the city. “MSEA is supposed to be in charge with a basic master plan and providing guidance, but there is not full transparency necessarily. This is what I’m scratching my head about, honestly.”

Jungle Island’s president, John Dunlap, did not respond to an interview request, but issued a statement in which he said “it is our policy not to discuss private business negotiations.”

The statement does not mention the ESJ investment firm, but adds: “We are proud to share that companies like Spectra Food Services & Hospitality (formerly Ovations), SharpShooter Imaging and Wildlife Trading Company have already committed significant investment dollars towards the redevelopment of our park services and attractions.”

Some of the Watson Island projects have been dogged by litigation. An appeal is pending on a lawsuit by a group of Venetian Island residents who contend the city improperly extended the agreement for Island Gardens after the developer missed several key deadlines. A circuit court judge dismissed the case without getting to its merits after concluding the residents do not have standing to sue.

The seaplane base’s former operator and the city were ensnarled in lawsuits for years until the new operator, lawyer and aviation enthusiast Ignacio “Nacho” Vega, bought him out. Vega said he now has six seaplane operators making four to five flights a day between Watson Island and Key West, Bimini and Fort Lauderdale.

In December, in his first and so far only commission meeting, the newly inaugurated Russell persuaded commission colleagues to put off until January a decision on a rezoning and land-use change that could clear the way for the redevelopment of the seaplane facility so that he could analyze the measure more closely. The changes would reclassify the land the terminal has occupied since 1929 from parkland to allow transportation uses. That would in turn allow the current operator, Vega, to submit plans for a new terminal to the city.

In the meantime, Vega said, he would remove a pair of dilapidated, condemned trailers on the property that served as office space and replace them with a new trailer. Eventually Vega hopes to construct a three- or four-story building with a restaurant and observation deck to attract non-flying visitors, because fees paid by airlines won’t be enough to sustain his operation. “We charge a minimal amount. Seaplane bases by themselves do not cover their costs,” Vega said.

The Island Gardens marina, meanwhile, is awaiting a temporary certificate of occupancy, which Regalado said should come in January. The developer’s representatives have said the marina would be operational, though the only structure on the property is a small building.